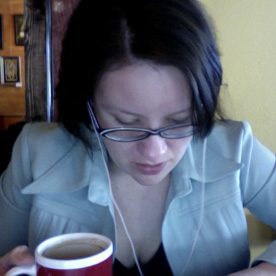 As a toddler, Wendy cried every time she heard You Are My Sunshine and was very particular about nighttime stuffed animal placement. Many years later, she studied Art and Art History at The University of Georgia, wrote a lot of songs, and eventually moved to Austin, TX. There, she quickly realized that Ctrl+Z was much more efficient than a Kneadable Eraser. Since then, she has worked as a graphic and web designer/developer, animator, writer, song-crafter, production designer, and general creative problem-solver (My Own Room Media).

She once wrote a column on Austinist.com (Hello, My Name Is), thrice played in a bunch of bands (The Casting Couch, The Glen Gold, Hi Fi Mastodon), and many times has embarked on experimental theatrical journeys with Tongue & Groove Theatre. She currently runs The Stuffed Animal Rescue Foundation, occasionally shoots cans off of her porch from her bedroom with a Red Ryder BB gun, and plays as much volleyball as possible. She has excellent hand-eye coordination and is intermittently working on a play or novel or mental exercise based on a fictional reality TV show involving advertising, marketing professionals, sadness, the internet, and outer space.

A comprehensive-ish repository of the odder wendy projects throughout time...